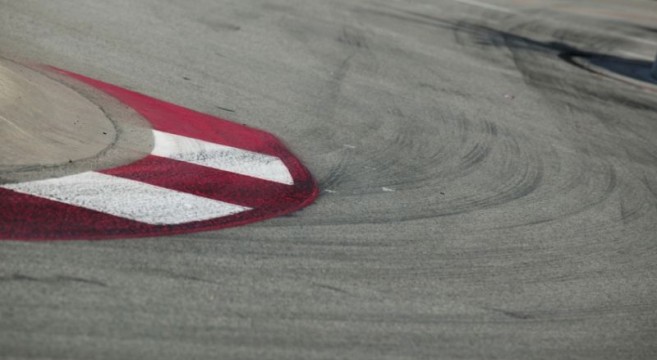 The Japanese Grand Prix at Suzuka all but guaranteed Sebastian Vettel his fourth consecutive world championship, after winning his fifth race in a row and ninth of the season. He now just needs 10 points from the remaining four races of the season even if Fernando Alonso wins all of the remaining races, and so will almost certainly secure the title in India in two weeks time, as well as Red Bull should surely securing the constructors championship in the next few races.

Mark Webber was unable to hold onto the pole position he took on Saturday, slipping to second off the start, with Roman Grosjean getting a fantastic launch in his Lotus to make his way from fourth on the grid into the lead, with Vettel behind settling into third place after tangling with Lewis Hamilton on the run down into the first corner. The Mercedes driver sliced his right rear tyre on the front wing of Vettels Red Bull as the drivers bunched up into the first corner, leading to major bodywork damage on the rear of Hamilton’s Mercedes and forcing him into retirement. The Marussia of Jules Bianchi and the Caterham of Gido Van der Garde spent even less time on the track than Hamilton, collecting each other as they entered the first corner, both ending their races in the gravel trap. Both Marussia and Caterham look set to battle it out for 10th and 11th place in the constructors championship again this year with both still waiting to secure their first point in formula 1, and while Marussia currently hold the advantage, both will be pushing hard until the last race to secure 10th place and the extra funding that will come with it.

Back at the front of the race it was Grosjean who led from the two Red Bulls up until the first round of pit stops. Webber pitted early due to high tyre degradation putting him onto a three stop strategy for the race, while Grosjean and Vettel were able to go longer on their tyres and only make two stops. After the second round of stops Webber maintained his lead, behind him Grosjean emerged just two seconds ahead of Vettel, but the German had been able to conserve his tyres during the previous stint and stay out for an extra eight laps, meaning he passed Grosjean on vastly fresher tyres to effectively take the lead. Webber at this point was still at the front but had one pit stop remaining. After Webber emerged from his pit stop in third place, he was able to catch Grosjean on fresher medium tyres while Grosjean was on the slower harder compound, but crucially spent seven laps stuck behind the Frenchman, meaning that when he did eventually pass Grosjean he did not have time to catch Vettel before the end of the race. This allowed Vettel to take yet another victory, with Webber bringing home a Red Bull one-two, and Grosjean completing the podium.

Behind the leaders, Fernando Alonso was able to move up from eighth on the grid to finish fourth, after battling with Kimi Raikkonen who ended fifth, and Nico Hulkenburg who continued his good form to take sixth. The Sauber driver is now favourite to take Raikkonens vacated seat at lotus next year after much speculation about his destination, including the Ferrari seat which Raikkonen will instead occupy. Feliepe Massa also showed that he is very much driving for himself and a seat for next season now, after Ferrari announced they will be replacing him next year. Many times in the past has Massa been forced to move over and allow team mate Alonso through, but this time Massa ignored team orders to allow Alonso through during the first stint, although Alonso would still pass him in the latter stages with Massa going on to take tenth, so Ferrari decided they wouldn’t take matters any further. Although Massa has not reached the heights he did in 2008 after his crash at the Hungarian grand prix in 2009, he has still shown some good form this year, and with major sponsorship backing from Brazil, he very much remains an option for teams like Sauber and Williams who are yet to finalise their driver line ups and are desperately short of cash.

Sauber driver Esterban Gutierrez also scored his first points in Formula 1, coming home in seventh, and underlining Saubers great recent form after a poor start to the season. In stark contrast to Sauber are Force India, who after a fantastic start to the year which saw them ahead of McLaren in the constructors championship, have slipped down the constructors championship after a terrible run of results including five consecutive retirements for Paul Di Resta. They were able to recover slightly in Japan, with Paul Di Resta finishing eleventh and Adrain Sutil fourteenth, but they will face the potential of competition from Sauber for sixth place in the constructor’s championship in the last few races. Williams remain the ninth best team in Formula 1, having only scored just one point this season, and it looks as though they will have to wait until next season for any upturn in fortune, their two drivers finishing sixteenth and seventeenth, ahead of only the Marussias and Caterhams, with Pastor Maldonado barging past his teammate Valtteri Bottas at the final chicane in a move Bottas described as unfair. The two Toro Rossos had a good race, finishing in twelfth and thirteenth. Jenson Button in his McLaren was able to finish ninth while his teammate, Sergio Perez, could only manage fifteenth. Mercedes’ Nico Rosberg finished eighth, but was unlucky not to challenge for higher after being awarded a drive through penalty after an unsafe release from his pit stop.

This week was also reminder of the immense danger still posed by motorsport. The deaths of formula Marussia test driver Maria De Villota, whose death was linked to injuries she suffered when she crashed during testing in July 2012 and Sean Edwards, a Porsche Supercup driver, killed while at an event at Queensland Raceway in Australia, have been a reminder to everyone in the sport that while safety has become much better in recent years, there is always a huge danger every time a driver enters the track.

Joe Urwin is an upper-sixth student at Altrincham Grammar School for Boys with an interest in Formula One.