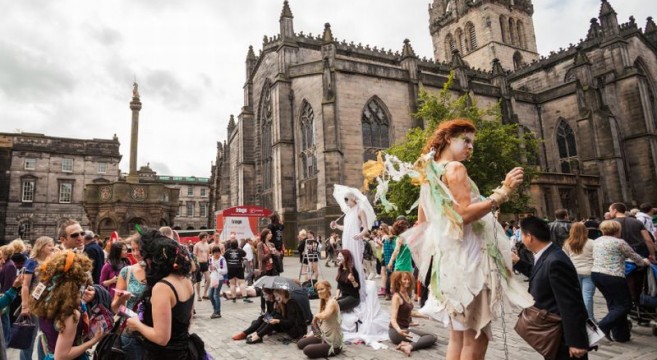 Why Street Theatre is Underrated

Edinburgh Fringe Festival is, for lack of a better word, chaotic. Brilliantly chaotic. You couldn’t walk a metre in the centre without being stopped by a group of students or having a leaflet thrust into your face. Thousands and thousands of people, Scottish and non-Scottish roamed the streets and made Edinburgh seem as if it was the capital of the world. Never in my life have I ever seen so many different types of people all in one place, and I thought it was brilliant. I absolutely loved it. With the amount of choice that is presented to you, it’s hard to not find anything that would appeal to you, and the performers do their best to make sure everybody knows about their act. Unlike some comedians, the little groups of actors or dancers were nearly completely unknown, and they worked hard to try and attract some attention. To others it may have seemed annoying, but to me one of the most compelling aspects was the fact that they went out daily onto the streets to hand out leaflets or pieces of paper with their show on it, and most of the time were even courteous and polite if ever you didn’t take their advertisements.

That being said, it wasn’t the groups of amateur performers that I enjoyed the most. Street theatre and its performers attract a certain social stigma, as people often mistake them to be lower-class citizens with fewer qualifications. I can say that for me, this was certainly the case, but I’d never seen real street theatre before. When I did, my whole attitude to the profession changed. These entertainers not only have to compete against themselves, but against actors or dancers who are generally regarded as better, more professional performers. Street theatre makes its money after the show is over, when the audience get the opportunity to deem for themselves whether the performance was worth any money, instead of buying tickets beforehand. This adds a new level of pressure to their act, as for many street performers this is their only source of income. There is no guaranteed audience. They are given a location and a time, and then left to their own devices. There is no security, no lights, and no fancy gimmicks. The performers have to rely on their ability alone to make the money, and that’s why it is so hard for them; they have to be original. Nobody wants to pay money to see something that’s been done countless times before, since it holds no appeal. There needs to be an incentive to get a person to stand there and watch somebody perform or else it just becomes another show added onto the thousands of shows available around the festival. I could count on one hand the number of people I know with the guts and the confidence to perform in a busy street of people with nothing but their skill and personality to help them.

There is of course the occasional dud, the performers who stand there with a whip and a whistle, blowing it every ten seconds for no apparent reason other than to try to attract an audience. The result, of course, is the opposite. Instead of going to watch, the sound of the whistle practically wards away the crowds and only annoys anybody who had given them the benefit of the doubt and come to watch. This type of street theatre is one that did not impress me, and even worse, whenever myself or anybody tried to leave, they would point it out to the whole crowd to show the other spectators what would happen to them if they left as well. Occasionally they would add an extra comment on the end to try and guilt-trip you into coming back, but by that time the people leaving were already speed-walking away, acting as oblivious and innocent as the day they were born.

I went to the Fringe Festival with the intent to see some of my favourite comedians perform. I left, four days later, having spent my time watching either student productions or street theatre and feeling as though I had really experienced the true meaning of the Fringe. I also probably came out of it around £50 better off too.

Cerys Spilsbury is an upper-sixth student at Altrincham Grammar School for Girls.