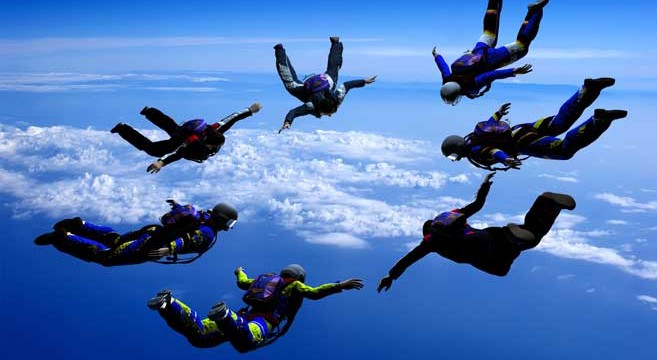 Why Charity Skydiving Is Such a Drag

What with Children In Need having been and gone once again, I thought it would be a good idea to write about raising money for charity. In particular, as you can see from the title, charity skydiving, and why this particular method of raising money really grinds my gears.

Sponsoring someone to do a charity skydive is like paying for them to have fun. Just because something seems a bit dangerous or whacky does not mean that you can ask people for money to do it. I, for example, wouldn’t ask for money to go and abuse homeless people in the street. If you want to do something like that, then fund it yourself*. Why should other people fork out just so you can have a laugh and a giggle and an adrenaline rush? Unless the people sponsoring you are a) your parents, b) your partner, or c) so loaded they are giving their money away to anyone with some atoms vaguely resembling a brain, why would anyone pay for you to have fun? They’re going to need more of a reason than “some of the money is going to charity”.

Moreover, these people pass off doing a charity skydive as something incredibly selfless and as if they are sacrificing their lives for the wellbeing of others, but if someone really cared about a charity then why not just set up a direct debit and make regular monthly payments? I’ve volunteered for charities in the past and it’s quite clear that they would rather have regular contributors rather than slightly-larger-than-small-sized sums of money donated every now and then. That way they have a reliable source of income and can plan and grow the charity, which is surely what the afore-mentioned Selfless Citizen would want.

On top of that, skydiving is not difficult. People argue that it is dangerous and exciting or whatever but the truth of the matter is: you don’t have to do anything at all. It consists of sitting in a plane, waiting, stepping out of a plane and then waiting until you land. Yes there is an exciting bit of falling through the sky but that requires no skill. You don’t even open the parachute. There is a person strapped to your back doing all of the hard stuff. In fact the only ‘skill’ necessary is that you weigh less than 15 stone and anyone who thinks that is a skill is probably the type of person to do a charity skydive. Perhaps if you were thrown out of the plane with no prior training and the parachute thrown out separately then it would be more of a challenge. But unfortunately this is not how tandem skydiving works. What a shame.

But why Adam, I hear you cry, does something have to be challenging in order for it to be fit to earn money for charity? Well, attentive reader, after training for a challenging activity for weeks and then finally completing it, people feel an immense sense of achievement and happiness, therefore they are more likely to want to do it again. This rewarding feeling leads to more fundraisers in the future and therefore more money for the charity, so everyone’s a winner. Fundraisers with an absence of effort lead to hardly any sense of achievement and therefore no long term benefit for the charity as individuals will not be motivated to do it again, which is evidently not beneficial for charities. Furthermore a lack of challenge could lead to the trivialisation of fundraisers and people could start to pass off anything as one. Yes fundraising should be enjoyable, but turning the whole idea of it into a joke, or something that is mind-numbingly simple, is damaging to charities in both the short and long term and thus the individuals that they help.

But what if someone was scared of heights and they were doing the skydive to try and conquer their fear? Well then I would say well done and congratulations… but if someone had a serious fear of heights they would probably be seeking medical advice, and them getting on a flying plane, or going to the top of a high building would be a serious achievement. Jumping out of a plane miles in the sky would be a miracle. But there is obviously no guarantee that they would do it. It is quite possible they would chicken out at the last minute and I wouldn’t blame them! If the very idea of height made my legs turn to jelly and my stomach churn then I would stay away from things that fly altogether. But if they did somehow manage to jump out of the plane then they could easily close their eyes for the whole experience and try not to think about it. Now, I’m no psychiatrist but I doubt that that would count them as cured.

But regardless of what anyone says about it being personal courage or that fundraisers have to be difficult or that they are useful for curing people of heights (yeah right), the biggest reason why charity skydives are foul, fetid, putrid excuses for fundraising events is that they do not raise much money for charity. Unfortunately, the skydiving companies still charge the full price (£290 at Skydive Tiltstock) for the skydive, but just take this out of the amount raised for charity. So at Tilstock, if someone raised £500, then only £210 would go to charity. More than half of the money donated doesn’t even get to the charity! If you haven’t agreed with anything else I’ve said, then surely this statistic speaks for itself. £500 is a lot of money for someone to raise for a charity skydive and I would be surprised if people raised much more. The charity is getting even less money than that. It is sad to see that £290 does not going towards helping those in desperate need of aid. They always say that every penny counts. Well there are 29,000 pennies that are going to waste for each dive. So why not do something different instead?

*NOTE: Adam Murphy does not condone the random abuse of the homeless as a fundraising activity.

Adam Murphy is “dashingly handsome” (self-proclaimed), ex -AGSB student who is currently working full-time in a call-centre on his gap year before studying maths at University (please don’t let that put you off him, he’s lovely really). He will be doing a charity skydive on the 21st November to raise money for- ok that’s a joke.