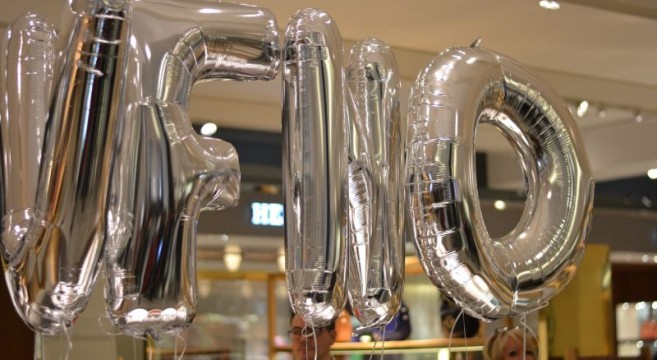 It was every fashion enthusiast’s dream. On October 10th, Manchester was captivated by fashion as, for the first time ever, Vogue’s “Fashion’s Night Out” was brought up North. The event had been held four times before, each time in London; so when the Vogue team finally decided they wanted a change of scene, Editor-In-Chief of British Vogue Alexandra Schulman said: “naturally Manchester was our first choice”.

When I first told people I would be attending the glorious Fashion’s Night Out, nine out of ten times I would be asked “What is it exactly?” I found it a hard question to answer. For someone who loves to write, I was stuck for words. “It’s kind of like a major fashion event-slash-exhibition-slash-show-slash… (the list goes on)”. I wasn’t quite sure what to expect, although the expectations were high.

They weren’t kidding when they called it Fashion’s Night Out. I’d never seen so many well-dressed people gather in Manchester City Centre in my whole life. Not only was the standard of fashion high; the music was exquisite. We were never left without sound thanks to DJs such as Jameela Jamil, Bip Ling and Princess Julia.

In Selfridges, you could have a professional makeover, manicure, food, and drink, EVEN a professional photograph of yourself inside an over-sized Selfridges bag!). Outside Selfridges? A little less classy but so much fun: a Flash Mob so epic, the words “flash” and “mob” have been anointed proper nouns for the occasion. The word “cool” doesn’t serve three hundred well-dressed people dancing to Justin Timberlake’s Rock Your Body justice. I don’t think I’ve ever seen a DJ look so happy with the reception of his works.

Despite the anti-fur protestors outside, Harvey Nichols was equally as fabulous. A chance to watch interviews held with Vogue editors and designers; if Vogue is your bible, you had to be there. For me, seeing so many influential people from the industry in the flesh was over-whelming. The Vogue editors had all styled their FNO t-shirts their own way, and if you were lucky enough to get your hands on one, the entire second floor was packed with official customizers tailoring t-shirts to fit with your aura.

I am merely brushing the surface here, it’s impossible to cover everything that went down on that grand night out. However, if you didn’t manage to make the event there’s no need to worry, I’m sure enough people took pictures for you to live (or even re-live) the whole night. I know what I’ll be doing.

Donna Salek is Fashion Editor of Lucid and an upper-sixth student at Altrincham Grammar School for Girls.