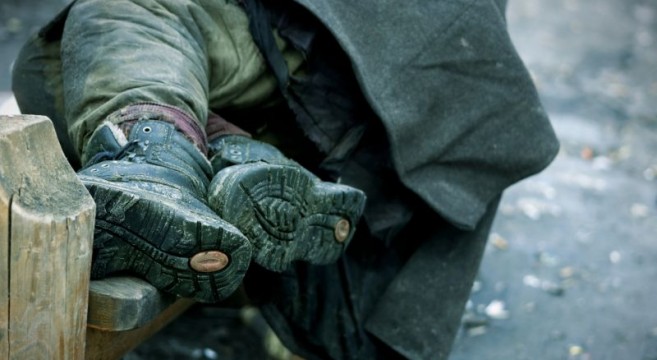 Written and directed by Nadia Fall starring award winning Michaela Coel, Home is a new step for The National Theatre. Using a verbatim script to display the endearing lives of youths in an East London shelter for the homeless, it shines light on the trauma suffered by those left in the hands of the state and their inspirational stories as they struggle to piece their lives together. The average middle class audience’s life, with its first-world problems, seems like a walk in the park compared to the daily events of the thirteen characters in the play.

Throughout the play, the brutally honest testimonies of young people are revealed through an unusual verbatim script, incorporating current music giving the play a youthful edge and The National Theatre a new lease of life. With roots in naturalism and Brechtian theatre, verbatim scripts are often like documentaries with extra text woven in to create a coherent narrative, used as an exploration of issues and opinions on matters which concern the public. Having recorded 48 hours worth of interviews in a youth hostel, Fall entwined heartfelt songs and thirteen devastating stories of abusive relationships, absent mothers and painstaking refugee journeys to create a raw and honest piece of theatre. Although the full truth of the dialogue is uncertain, the sincerity within any verbatim piece is always apparent and certainly transcends in Home. Immediately the audience are engaged with the characters, feeling a rapport with them, as if they are sat having a conversation rather than watching them from the stalls of a theatre, shattering the common boundaries of the fourth wall.

Yes, the play is a poignant reminder of how suffering and poverty still exists even in the communities a stone’s throw from the multimillion pound financial industry of Canary Wharf, however it leaves you not only admiring these young lost souls, but uplifted and inspired by their dreams and determination. As the characters deal with defeating circumstances with such dignity and spirit, we begin to question our own strengths and appreciate our privileged lives. Fall doesn’t exaggerate the pathos of the events, but simply demonstrates homelessness to the audience without digging for sympathy and preaching moral values and allows the genuine characters to affect each passive audience member uniquely.

Ruth Sutcliffe’s simplistic set design of bare walls, graffiti, un-coordinated furniture complete with used notice boards, elevates the natural truth within the stories and creates the imaginable austerity of a bleak shelter. Using The Shed, a temporary building detached from The National, to stage this, compliments the themes of identity and belonging in the surroundings and provokes the audience to question what exactly they call home. A glass window, old and dirty, divides the stage and is used to let us see how life carries on for the characters outside the interviews and that between a single pane glass, life can change dramatically.

I had the opportunity to speak with Antonia Thomas who played an Eritrean woman stuck in the shelter after fleeing her country. She explained to me the “great pressure” of portraying the true story of a young woman’s journey to sanctuary in England. After meeting the woman and hearing her story first had, what started as just another job, became a “personal” piece of theatre for Thomas; she made it her “responsibility” to do the horrific story justice.

One character was not included in the verbatim; in fact, she had no words at all. The twice British female Beatbox Champion, Grace Savage, took the role of Jade, a young pregnant woman whose dialogue was purely beatbox. The standout performance was a suggestion that not all stories can be told easily and a reminder of society’s obligation to solve the final question given to Jade “What are we going to do with you then?”

The pure hope that binds the plays characters together is truly stunning and the overwhelming message of courage and grace, that this simplistic piece of theatre provides, resonates with the audience long after they have arrived home.