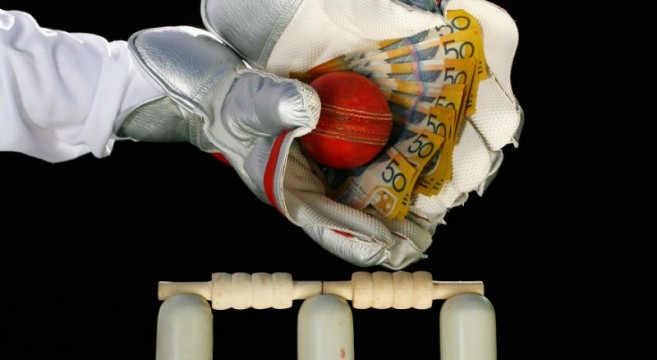 Corruption in the IPL

Match fixing within any sport raises a few eyebrows, never mind the fact that it’s happening in a sport that since the 90’s has had to deal with more fixing allegations than any of the current reality TV shows. Cricket remains one of the few team sports in which outstanding individual performances are more clearly observable due to the contest between the batsman and the bowler. This contest means that individuals can determine the final outcome of the match leaving Cricket more vulnerable to match fixing. Hansie Cronje’s televised apology to Salman Butt ordering his bowlers to bowl no-balls, emphasises these facts. So what was so special about the fixing taking place in the IPL?

The IPL (Indian Premier League) is a competition between 8 city based franchises and ever since its inception in 2008, it has combined India’s 2 greatest pillars; cricket and Bollywood. This was a fantastic tournament which involved players from all around the world who were auctioned to these 8 franchises owned by businessman and Bollywood stars. Cheerleaders, dancing and the ball clearing the rope wouldn’t have pleased purists but this is exactly what was happening in the IPL. Players would earn millions of dollars for 6 weeks of work which ultimately attracted the best cricketers from all round the globe.

One of the franchises, Rajasthan Royals had surprised everyone by winning the first edition of the IPL even though they didn’t have the financial support that some of the other sides did. The charismatic leadership of Shane Warne who was willing to back the youngsters meant that their fresh approach to cricket baffled star studded line ups. The baton for the leadership passed to Rahul Dravid, probably the most reliable cricketer India has produced and under his leadership, Rajasthan reached the semi final of the IPL and the final of the recently concluded Champions League. However during the IPL, what became evident was that 3 players from the Rajasthan franchise had been approached by bookies to underperform and expect a fee for their troubles. The fact that this happened under the watchful eyes of reliable captain Dravid was even more surprising. From a fan perspective, how can someone betray a man who despite having played second fiddle to another great cricketer is a legend in his own regard?

What shocked people most about this was all 3 players were arrested for multiple offences, raising concerns about the level of corruption within this tournament. Of course, it would be too extreme to stop the IPL completely (even though some have suggested this), but the corruption within the IPL can be curbed. There is an anti-corruption committee with a protocol in place asking players to report to them if they have been approached by bookies but my mind can only be taken back to the incident involving Zulqarnain Haider. This man fled to London when he received calls from bookies who were threatening his family if he didn’t take part in their fixing scandal. He hasn’t played international cricket since and his case highlights a key facet of fixing, the bookies’ power to get their way without the anti-corruption committee knowing.

Perhaps, what was even more shocking was that these 3 players would be earning huge sums of money for 6 weeks work (remember), so despite their riches, what could have gone through their heads for them to think that I need more money. Greed has a part to play but you have got to think from their perspective, from a sportsman’s perspective. Most of us would feel comfortable in our jobs by the time we reach our fourties but this is the period where cricketers have to hang up their boots and prepare for a life away from something which has been their life for almost 2 decades. As human beings we want to have a relaxed life and cricketers are also human beings who want a luxurious life after retirement. Knowing this they try to maximise their earnings during their playing careers which may mean accepting a few bribes in order to under perform.

However this attitude in my humble opinion should be avoided because as soon as people take this view, the game’s integrity will come under threat and people will accept fixing as a natural phenomenon within cricket. This is a game which is loved by millions around the world and it would disgust fans if they began to hear that their favourite players were willing to under perform in order to earn more bucks.

Naturally, the three players who were arrested by the police have had their contracts terminated by the franchise until the investigation had been completed. This investigation also shed light upon other corruption cases within Indian cricket as the police were able to arrest the owner of the Chennai Super Kings for having links with the bookies. The owner was the son in law of Srinivasan, the president of the BCCI. The BCCI is the board of cricketing control of India and they manage the country’s cricketing affairs, so the president of this organisation has links with the bookies doesn’t bode well for Indian cricket as a whole. Again the Chennai based team distanced themselves from Meiyappan (Srinivasan’s son in law) until further investigation has taken place. What is interesting about this case is that Chennai are owned by India Cements whose CEO is none other than Srinivasan himself. However according to opening batsman Michael Hussey’s new book ‘underneath the southern cross’ Srinivasan himself handed over the control of the team to Meiyappan because Srinivasan was part of the committee (BCCI) which is in charge of organising the IPL. Moreover since the arrest of Meiyappan, Srinivasan has called his son in law, nothing more than a ‘cricket enthusiast’ something which is contradictory to what is written in Hussey’s book. Politics within cricket is not unfamiliar in India and who’s to say Srinivasan wasn’t involved with his son in law and that he didn’t use his own team’s confidential information for personal material gain?

Whatever the situation, these cases have highlighted corruption within Indian cricket. While the national team continues to excel beyond its transition period, having won the Champions Trophy a month after the spot fixing issue reached the media’s attention, it is evident that the corruption which had manifested itself in Indian politics is now taking hold of Indian Cricket.
In order to answer the original question ‘why this case of spot fixing was so special’, a simple answer is that it isn’t and it is no different from any other fixing case which has shocked the world but perhaps what is different is that it’s left a fan deeply hurt, a fan that devastated with such allegations ruining a game he loves.

Shantam Taneja is an upper-sixth student at Altrincham Grammar School for Boys and Cricket enthusiast.