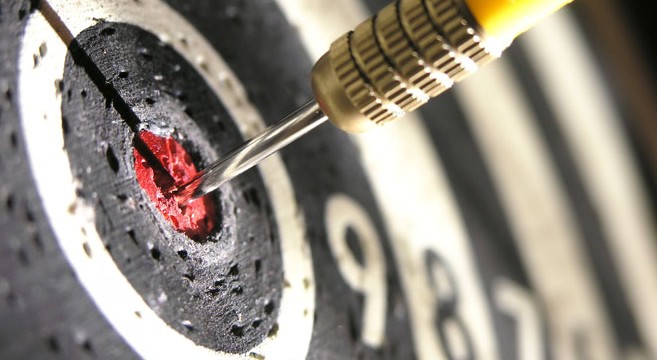 A Crash Course in Voting Systems

So you want to vote? That’s nice; how exactly would you like us to handle your vote? Democracy is all well and good, but if the results don’t reflect the votes then the public is being cheated. Lucid Politics presents here a basic introduction to a number of different voting systems – decide for yourself which one you prefer!

The UK uses this system. Everyone gets one vote. Whoever gets the most votes wins. It favours two-party systems, which in turn usually favour non-coalition governments (major exception: this one).

• You can often get constituencies (voting areas) where over half the voters didn’t vote for the winner.
• Encourages tactical voting, or the ‘spoiler effect’: not voting for the party you want to vote for because you don’t think they’ll win, so voting for a more popular party that is similar to the one you like. Cases in point: the Liberal Democrats, the Green Party, UKIP.
• Not proportional to the number of votes cast; there is no clear ratio of votes:seats.
• Encourages gerrymandering: changing constituency boundaries so that ‘safe seats’ can be created or so voting ranges/constituencies are easier to win. Observe (image source- wikipedia):

Notice how there are the same votes, arranged in three different ways, allowing for either ‘squares’ or ‘circles’ to win the entire constituency and therefore take all of its representation.

The UK had a referendum on this in 2010. We said no. The Australian House of Representatives uses this, as does the Labour Party and the Liberal Democrats for internal elections. The voter ranks candidates in order of preference: “1” for their favourite, “2” for their second-favourite, “3” for their third-favourite, and so on. The first-preference votes are counted; if one candidate gets more than half of the votes, they win. If no-one gets 50+%, then the candidate with the lowest vote is eliminated. Votes are then counted again; anyone who listed the eliminated candidate as their first choice has their vote given to their second-choice candidate. If, after this second round, there is still not a candidate with a majority (50+%), then the process of elimination takes place again, until there is a candidate with over half of the votes. 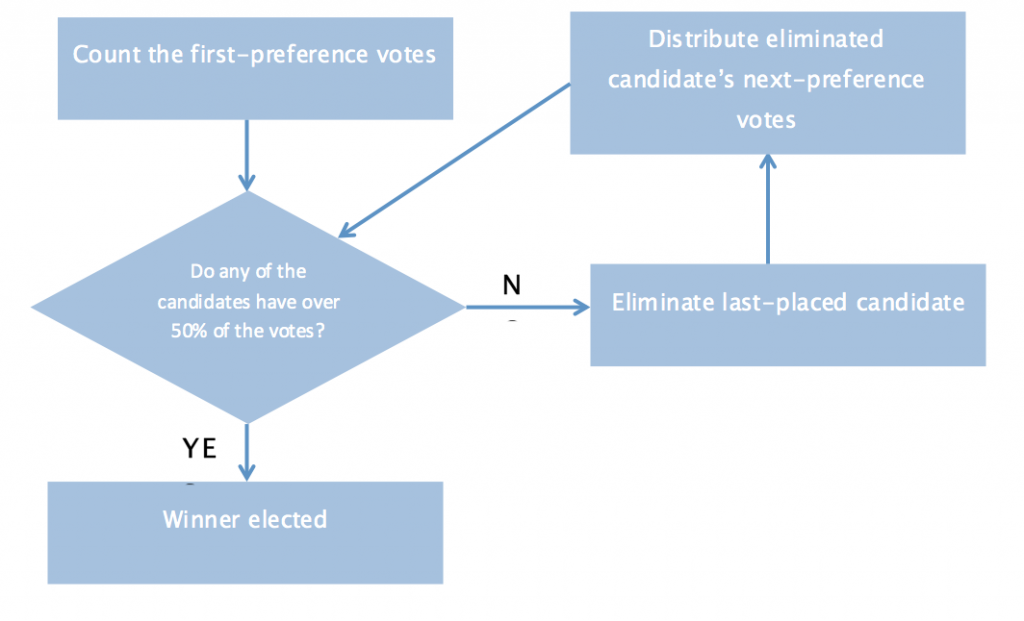 • Every MP is supported by a majority of their constituency’s voters.
• Stops extremist parties, who, because they are so radical, rarely get second-preference votes and will often be eliminated in the first round.
• No need to redraw boundaries or remove the constituency system.
• Encourages candidates to get out and gather support for people that don’t always necessarily vote for them, and discourages them from attacking other candidates as they may need that candidate’s first-preference votes as their own second/third-preference votes.
• Reduces the number of safe seats.
• Completely removes the ‘spoiler effect’.

• Not proportional.
• Does not prevent gerrymandering.
• “Compromise” candidates may be defeated in the first round in close elections even though they are more generally-acceptable to voters.
• Can introduce “donkey voting”: lazy voters just ranking candidates in the order they appear on the ballot.

Used for electing MEPs, and the Israeli Parliament (the Knesset). There are two types: Closed-List and Open-List. Either way, political parties submit a list of electoral candidates to choose from, and seats are awarded by numbers of the popular (entire) vote, usually by a ratio or formula worked out to avoid too many small parties gaining seats (for example, in Germany, where there is a minimum 5% threshold to gain any seats in the Bundestag). Open-List allows voters to choose individual candidates from the list provided by each party, and then individual candidates are elected according to the popular vote. Closed-List means that voters vote for a party as a whole, and therefore the party’s list; the candidates here will be listed in order, and will be elected one-by-one depending on how many seats the party gets.

• It’s simple; voters make one choice.
• It’s proportional, so every vote counts.
• Open lists offer voters even more choice as to who is elected.
• Closed lists are more open to measures that can increase the representation of women and minorities, such as quotas.
• Very proportional systems with low thresholds often elect many, many parties into government, so that no party holds a majority of seats; this usually results in coalitions, which are good as it forces parties to compromise and co-operate to produce consensus-building policies that more people agree on.

• Closed lists weaken the links between candidates and geographical regions.
• Closed lists give voters very little choice – all power rests with the party leaders, who may exclude candidates they do not like, or may choose candidates who are more likely to be “safe”, more likely to win, thereby reducing minority representation.
• Closed lists reduce dissent and differences of opinions within political parties, in favour of simply agreeing with the leadership in order to get picked for the list.
• Very proportional systems with low thresholds often elect many, many parties into government, so that no party holds a majority of seats; this usually results in coalitions, which may be unstable.

MMP, as it is known, does not remove the link between national politics and local politics, and it avoids this in the simplest way possible – everyone gets two votes, one for a person, one for a party. This is the system that Germany uses, and is similar to the system that the Scottish Parliament and Welsh Assembly use (which is known as the Additional Member System and is slightly less proportional). MMP is a hybrid system that incorporates elements of First Past the Post and proportional representation. Each constituency or voting range returns a candidate via FPTP, in the way that the UK system currently works. Then, on top of this, “top-up” seats are allocated according to the party votes, with the ranked votes:seats ratio system of Party-list systems used. This is used to balance out the actual number of seats each party has (including the local representatives) to make it reflect, as accurately as possible within the margin of error (determined mostly by the threshold that the system sets [as mentioned earlier, Germany uses 5% of the popular vote as a minimum]) the actual number of votes that each party received from across the country.

• Every voter gets at least one vote that always counts (as it is proportional).
• Every voter can still elect a local representative, as well as the above.
• Allows voters to vote for a local candidate that doesn’t necessarily belong to the party that they prefer without feeling like they are betraying their party of choice.

• All of the non-local representatives are accountable to their party leaders, not the public.
• It’s complicated – people may get confused between their votes, or indeed what their two votes are for.
• Having two different types of representative can cause tension – for example, elected representatives in Wales and Scotland who have been elected from the party lists rather than the local elections can be seen as “second-class” or having “got in through the back door”.

A note from the Editor:

I urge absolutely anyone who is interested to do more research into voting systems; often, the simple facts about any one system do not reveal all of the true advantages and disadvantages of each system. Electoral systems comprise a massive field of study, with unexpected phenomena such as implicit collusion, decoy lists and Condorcet criteria. It is essential that people get to grips with voting, as it forms the basis of our democracy – or our lack thereof. Indeed, our voting system itself, First Past the Post, has been blamed for low voter turnout, more than many stereotypes about politicians. I hope that this article has helped some people to understand voting systems better. Please comment below with any thoughts, or email me at alex.garrido@lucidmag.co.uk to ask questions or submit articles in response. As always, feedback is welcomed.